West Virgina is receiving national attention for the current issues surrounding the legislature and educators.  While it appears that students will be heading back to school shortly, it seems an opportune time to remember another time when West Virgina was in the national spotlight.

In 1943 several students exercising their first amendment rights took the fight up the the US Supreme Court.

"The refusal of West Virginia school children to participate in compulsory flag-salute ceremonies resulted the expansion of the constitutional protection for religious liberties for all Americans in the landmark 1943 case, West Virginia State Board of Education v. Barnette. Jehovah’s Witnesses Walter Barnette, Lucy McClure, and Paul Stull sued when their children were expelled from the Kanawha County schools for their refusal to salute the flag. They claimed that requiring participation in the ceremony violated First Amendment freedom of speech and religion." West Virginia Encyclopedia

This memorable event and other significant West Virginia moments are captured in a poster series on the PBS digital library PBS LearningMedia.

The posters can be downloaded and are accompanied by poster analysis worksheet. 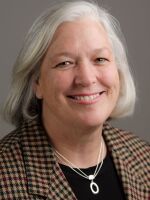 Kate FitzGerald
Kate has called West Virginia home for over 30 years. A native of Ohio, Kate came to West Virginia in the 80's to teach in a one-room school in Mingo County. Kate has spent her time in West Virginia working with community groups around the state on economic development issues and in a school setting, serving as vice-principal at a private middle/high school.
See stories by Kate FitzGerald
Latest Stories