For many teens the prom is the epitome of their high school experience. But for students who are lesbian, gay, bisexual, transgender and/or queer, it can be a challenge to feel like they belong. This year, some West Virginia students decided to start a new tradition: The Rainbow Formal, the state's first dance for LGBTQ youth.

Last weekend's event drew students from at least 10 counties to the student union at West Virginia State University.  One of them, 15-year-old Steve Sartin from Mingo County, managed the jitters while adjusting his rainbow suspenders and rainbow Converse sneakers.

"I’ve never actually been to a dance with others before – like a big dance like this. And I’m kinda nervous that I’m going to embarrass myself," said Steve, who is gay. "I know deep down inside myself I’m not doing to, but there’s that little anxiety that’s pushing up against me. But it's gonna go away."

Steve and the others in a new LGBTQ student group – so new it doesn't have a name yet – come from at least three southern counties. Some attendees met to get ready at the Charleston office of the West Virginia chapter of the national Quaker humanitarian organization, the American Friends Service Committee, which is supporting their work.

Steve came out to his parents last year – first as bisexual, then as gay. His mother has been loving and supportive, but he and his LGBTQ friends are often teased at Tug Valley High School.

Other schools in West Virginia, such as Hurricane High School, are more accepting of LGBTQ populations, according to students. Sam Green, a junior there who is trans and helped to organize the Rainbow Formal, said while some of his peers in West Virginia might not experience a similarly supportive environment, they can be themselves at the dance.

"The goal is that one day we don’t need to have this, that students won’t have to worry about going to school or going to dances or anything like that and having to worry about it – being with someone – if it it’s a same-sex relationship or being transgender and anybody thinking poorly of that," he said.

The overall outlook for some in the LGBTQ community includes some grim statistics. Four out of 10 LGBTQ youth say they live in a community that doesn't accept their sexual orientation, according to Human Rights Campaign. Forty percent of trans adults have attempted suicide -- most before the age of 25, according to a study from National Center for Transgender Equality.

Back in Charleston, Steve's friend, Jazmine, waited patiently as her mom made ringlets in her mostly shaved ice-blue hair and set it with a blast of hairspray. A bright and soft-spoken senior from Boone County, Jazmine came out as bisexual two years ago and and now identifies as pansexual, a term used to describe people who are attracted to others regardless of their gender or gender identity. She didn’t want to use her last name because some members of her extended family don’t know she’s not straight.

Her mom, Tiffany, is the only parent here – although all of the students needed to get signed permission forms to attend the dance Tiffany said she always helps her daughter get ready for dances. On this day, she helped Jazmine lace up the corset she paired with a bustle skirt, thigh-highs and Mom’s red heels.

"There’s nowhere I would be other than here today, because whether she’s going to Rainbow Formal or a traditional prom – or marrying a man or marrying a woman or whatever – I’m going to be there," she said.

"I feel very accepted and encouraged to be myself," her daughter said.

The students packed into a 12-passenger van when they finished getting ready. One reapplied one of her false eyelashes while another serenaded the group with a nearly flawless rendition of Bruno Mars’ “When I Was Your Man” on her ukulele.

Inside the student union, light from a disco ball bounced around the room and students lined up at the photo booth with props: a pink lei, an oversized pair of glasses and Mickey Mouse ears. Some held hands on their way to get snacks and others hung back to chat at tables.

Near the end of the night, a cascade of rainbow balloons fell over the crowd. Here, the teens said, is a place where they feel like they belong. 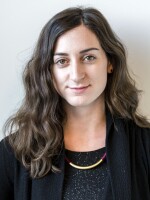 Molly Born
Molly Born is making the transition from print to radio reporting as a fellow with Report for America, an effort to strengthen local journalism in Appalachia and other undercovered areas. She's based in Williamson, W.Va., and will cover the state's southern coalfields.
See stories by Molly Born
Latest Stories