A GOP-backed suite of reforms to Kentucky's safety net would institute new work requirements and drug screening for recipients, among other provisions. 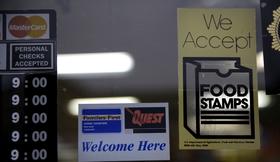 House Bill 3 — the low number denotes the bill as high priority — was submitted just under the wire last week ahead of the House filing deadline. Introduced by Speaker David Osborne, the comprehensive package makes a number of changes to public benefits: rolling back or redirecting available cash assistance through Temporary Assistance for Needy Families (or TANF), mandating drug tests for those with a felony or misdemeanor history of substance abuse, and adding a new photo ID requirement for food stamp recipients.

"We've not seen anything like this in Kentucky up to this point," says Dustin Pugel with the left-leaning Kentucky Center for Economic Policy, which opposes the bill. "This is a sweeping, one-of-a-kind set of cuts to the safety net, to cash assistance, to food assistance, and to Medicaid."

Those changes, according to Osborne, are not meant to punish, but rather to spur Kentuckians on assistance to get back into the job market. The approach echoes ideas on offer in Gov. Matt Bevin's 1115 Medicaid waiver.

Osborne told the Louisville Courier Journal that Kentucky has "less than 60 percent of total working-age population that is participating in the workplace" and the reforms are meant to transition more recipients into the workforce through "community engagement" programs. Those include work, volunteer, or job training options.

But Pugel predicts the changes will drive low-income Kentuckians deeper into poverty by removing key financial supports. The analyst says the TANF payments, while modest at around $100 a month, can lead to major pendulum swings in well-being.

"That help really has long term dividends for us as a state. It helps kids in school, helps parents get by, and improves lifetime earnings for the kids who get that assistance," he adds.

And there's the matter of cost. While supporters point to the positives of moving more Kentuckians off the public assistance rolls and into new employment, Pugel says the requirements necessaitate another layer of bureaucracy.

"For TANF and SNAP and to a large extent for Medicaid, those are federal dollars," he says. "So by pushing people away or making it harder to use these benefits... we're leaving federal funds on the table. Essentially we're spending state money in order to give up federal money."

Osborne counters that the funds aren't being cut, but rather reallocated to other areas more conducive to growing the workforce.

The bill has been posted in the House Health and Family Services Committee.